Fond du Lac Tribal and Community College was honored with three Medallion Awards for excellence in public relations, marketing, and communication in the 2020 National Council for Marketing and Public Relations District 5 Medallion Awards competition.
The Silver Medallion of Excellence Award for Excellence in Writing recognized an article written by Tom Urbanski, Fond du Lac Tribal and Community College Public Information Director, that was published in The Duluthian magazine. Titled “What We Did During Summer Vacation,” the article provided an insider’s perspective of how busy the college campus remains throughout the summer months. Urbanski also provided multiple photographs to accompany the article. 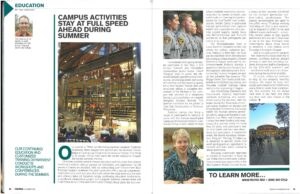 The Silver Medallion of Excellence Award in the Flyer (single or series) Category recognized a series of Admissions Facts Sheets used in the marketing communication sequence the college sends to prospective students who have requested college information. FDLTCC Public Information Director Tom Urbanski worked with Creative Director and Graphic Designer Steve Isola of AdMax Displays in Duluth to create the award-winning series of flyers into final printed form. The project’s graphic design was completed by Isola, using text written by and photographs taken by Urbanski. The project was printed at ProPrint, Inc., in Duluth. 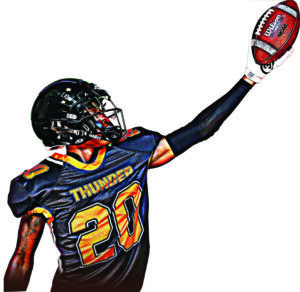 The Bronze Medallion of Excellence Award in the Original Photography-Manipulated Photograph Category recognized an image created for use on Thunder Football marketing pieces. The photograph features Fond du Lac Tribal and Community College Thunder Football wide receiver Eric Grant reaching out with arm fully extended to make a one-handed catch. The award-winning original photograph was taken by FDLTCC Public Information Director Tom Urbanski and he also completed the computer manipulation using photo editing software.
Award winners in each category are chosen from submissions by participating colleges and are judged and ranked by marketing and communication experts. Entries submitted to the Medallion Awards competition are judged on design, writing, creativity, communication, technical merit and overall effectiveness. The award recipients were announced at the NCMPR District 5 Conference held last fall in Manhattan, Kansas.
The regional Medallion Awards recognize outstanding achievement in marketing communication at community and technical colleges in NCMPR District 5, which includes Iowa, Kansas, Minnesota, Missouri, Nebraska, North Dakota, South Dakota, the Canadian province of Manitoba, Puerto Rico, and Virgin Islands. It is the only competition of its kind that honors excellence exclusively among marketing and public relations professionals at two-year colleges.
The National Council for Marketing and Public Relations is an affiliate of the American Association of Community Colleges and represents marketing and public relations professionals at community and technical colleges across the United States and Canada.
There were nearly 250 entries submitted across 36 categories in the 2020 NCMPR District 5 Medallion Awards competition. The printed publication categories and photography categories are some of the most competitive categories each year.
NCMPR has more than 1,700 members from more than 650 colleges across the United States, Canada and other countries. The counsel provides professional development opportunities, advocates on behalf of the profession and the institutions it serves, and recognizes professional excellence. 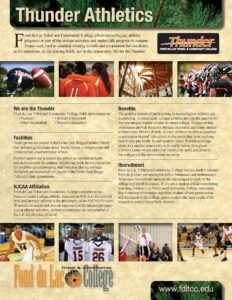 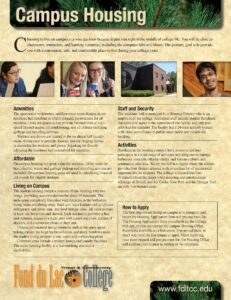 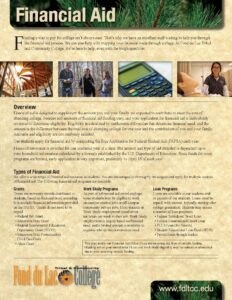 It is awesome here at the FDLTCC Education Program because it is like a family here, if you need help or are struggling with anything, you have quite a few people who will help you out.